by BELL WITCH and AERIAL RUIN 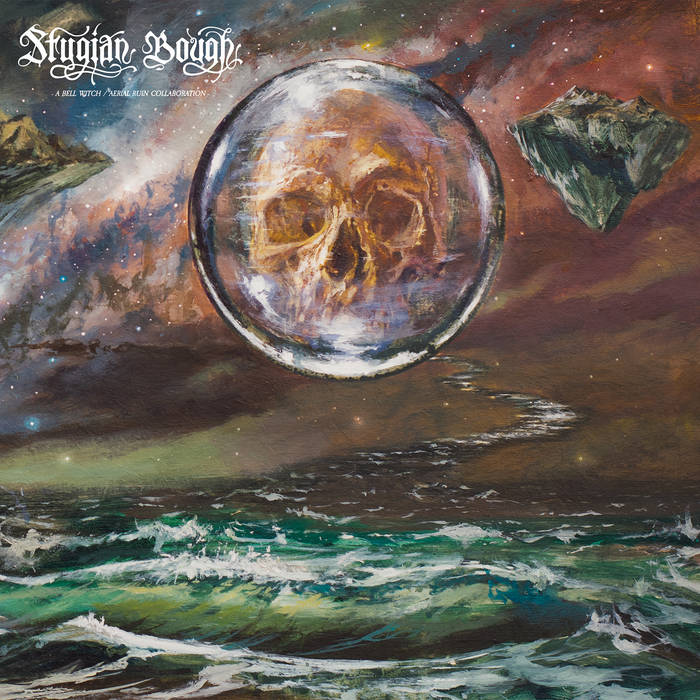 draakヰヂアン doom metal has never been so epic, atmospheric, intense and emotional. this record is a must listen, amazing and very deep! Favorite track: The Unbodied Air.

sex trout how can u not buy a bell witch album???

Genuine collaborations between two sets of artists are rare. For their new album, Stygian Bough Volume I, the members—Dylan Desmond (bass/vocals) and Jesse Shreibman (drums/vocals)—of doom duo Bell Witch didn’t just team up (again) with dark folk elegist Erik Moggridge (guitars/vocals) of Aerial Ruin, they fully integrated the two outfits. While Moggridge has been a part of Bell Witch’s sonic fingerprint on all their prior records, perhaps most notably for his vocals on their previous full-length, Mirror Reaper, he’s now part of the very fabric that makes up the five hauntingly beautiful, strikingly heavy songs that comprise Stygian Bough Volume I.

“We started working on collaboration material together sometime in 2019,” says Bell Witch’s Dylan Desmond. “But there was writing going on as far back as 2018. The original approach was going to be doing a split record in which we each covered specific songs from each other’s catalog.”

“It started in early 2018, I think,” Aerial Ruin’s Erik Moggridge adds. “By late autumn 2018, we were all three jamming and going through the ideas and writing lots of new ones. We then had to shift gears to rehearse for the Mirror Reaper (in its entirety) European tour in December 2018, but soon picked back up with writing in early 2019, which continued off and on right up until we entered the studio.”

Bell Witch and Aerial Ruin are officially a trio on Stygian Bough Volume I. The addition of guitar to the bass and drum-only dynamic came naturally as the threesome discussed potential models for their joint effort. Ulver’s unorthodox folk album Kveldssanger came up as did Candlemass' milemarker Nightfall. But the real fuel to Stygian Bough Volume I was the Bell Witch track, “Rows (of Endless Waves)," which was not only Moggridge’s first appearance with Bell Witch but also a track that has deeply resonated with Desmond over the years. With the approach in place, Bell Witch and Aerial Ruin collectively wrote five desolate yet mystical songs that defy categorization. From the mournful "The Bastard Wind" and the crepuscular “Heaven Torn Low (the passage)” to the monstrous “Heaven Torn Low (the toll)” and the liturgical gloom of “The Unbodied Air,” Stygian Bough: Volume I is an album of deep, dark undertows and careful respite.

“Bell Witch songs have always focused on the theme of the space between life and death,” reveals Desmond. “This approach lends itself to themes of duality and has absolutely shaped the concepts within Bell Witch. While I can’t speak for Aerial Ruin, I do think there is conceptual overlap between the two projects also. Aerial Ruin songs often mention a sort of empirical ‘veil’ or ‘lie’ in regards to perception or life, which I think is ever-present in much of the conceptual and lyrical ambiguity and insinuations Bell Witch works with also."

“The duality of life and death is certainly important here,” Moggridge continues.

Lyrically, the themes explored by both Bell Witch and Aerial Ruin independently were tackled from different angles but were mainly from similar spaces. Whereas Bell Witch plumbed the depths of purgatory—a place of atonement between life and death—across three full-lengths, Moggridge’s Aerial Ruin have centered on the loss of the self and the spiritual places the vacancy ultimately leads to. For Stygian Bough Volume I, Bell Witch and Aerial Ruin topics of choice intersect and complement, continuing in spirit but with a broader vantage point where "Rows (of Endless Waves)” left off.

“Stygian Bough is a reference to the theme of The Golden Bough,” observes Desmond. “The book’s theme is centered on the rites of a temple in ancient Italy where slaves were transformed into kings by slaying he who reigned as such after successfully stealing the Golden Bough from the sacred tree within the temple. Within that notion, a different sort of slavery was brought upon the newly crowned king, as he must understand sooner or later that his fate would ultimately be the same as his predecessor. In short, the golden bough made a king out of a slave only to find they were now enslaved to a different sort of tyranny, always stalking them from the darkest shadows of their imagination. From this perspective, the "golden bough" is better understood as a deception casting darkness. Thus, Stygian Bough.”

Adds Moggridge: “They presented that song [“Rows (of Endless Waves)”] to me in a mostly instrumental form with the idea that it's about a ghost trapped on rows of waves that can’t reach the land. I ran with this idea and started to think of the ghost of a king who, if he reached land could be reborn and rule again. The king is also a larger metaphor for humanity who rules over the planet and other species. On this new album our ghost upon the waves flees not towards the land but towards death. The narrative, as much as it exists, is loose and not linear and definitely stream of consciousness. There are cyclical and spherical qualities to the journey where death, desolation, and the spirit are reflected in myriad ways.”

Stygian Bough Volume I was recorded and mixed by Randall Dunn at Avast Recording Co. in Seattle. Bell Witch and Aerial Ruin then took the full-length to mastering ace Bob Weston at Chicago Mastering Service in Chicago. The result is a full-length of profound lows and delicate highs. The overall production fits Bell Witch and Aerial Ruin's quiet/introspective and heavy/loud dynamic well. One listen to "Bastard Wind" and instrumental piece "Prelude," and it's easy to understand the trio's sonic preferences, which fall somewhere between Roy Harper, Bert Jansch, Warning, and Candlemass. As for the triumvirate's next steps, they're planning on touring in support of Stygian Bough – Volume I and eventually collaborating on music for Volume II.

“We’re hoping to do another one of these collaboration albums in the coming years,” says Desmond. “I think the direction we’ve taken is well worth exploring further.”

“We look forward to touring in support of this album,” Moggridge divulges. “Then, working on and eventually recording new material. New song ideas have already begun to grow…”