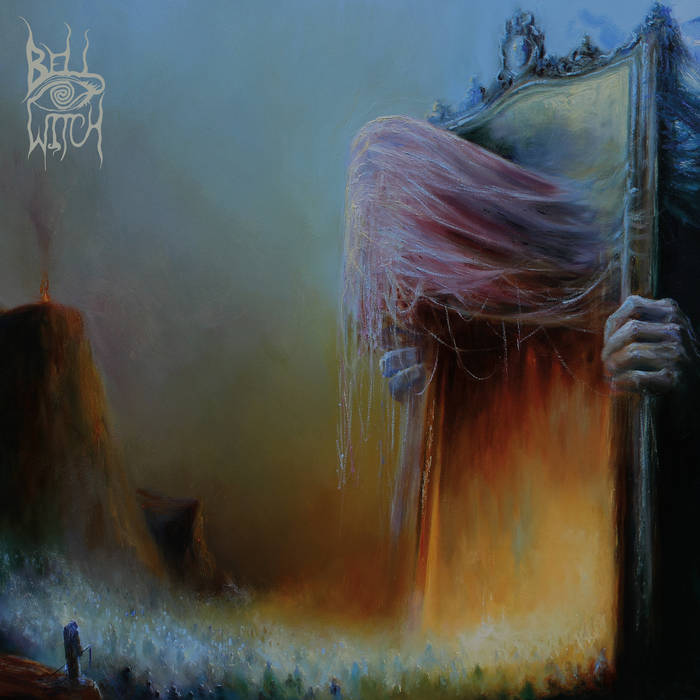 Grimhand This record demands to be heard in one sitting. A heavy, mournful, and beautiful experience with just the right amount of tension and release. Push and pull. A definite high point for Bell Witch and strongly recommended.

The addition of organ and passages with clean vocals are a beautiful counterpoint to the funereal doom throughout. Stunning.

D33DS An hour and a half long walk through time with mortality as your tour guide. Trudging through this monster is well worth your time if you can set aside enough for it.
more...

With their third full-length album, “Mirror Reaper,” Seattle’s doom metal duo BELL WITCH have created a truly enormous work – one continuous 83-minute piece unfolding as a single track. The album will be released on October 20th by Profound Lore Records.

Engineered and mixed by veteran producer Billy Anderson (Swans, Sleep, Neurosis), the duo of Dylan Desmond (bass, vocals) and Jesse Shreibman (drums, vocals, organ) have pushed the band’s sound further than it’s ever gone before. While retaining the monolithic heaviness of their previous releases, “Mirror Reaper” sees the band explore the more meditative, melancholy, and introspective aspects to their sound through the introduction of long, lonely organ passages and the return of honorary BELL WITCH member, vocalist Erik Moggridge (Aerial Ruin), offering a prominent presence. The artwork for “Mirror Reaper” was painted by Mariusz Lewandowski respectively.

Formed by Desmond and ex-drummer/vocalist Adrian Guerra, BELL WITCH released their first self-titled demo in 2011 and partnered with Profound Lore Records for their debut album, “Longing,” in 2012. The duo’s second LP, the acclaimed “Four Phantoms” (2015) was recognized as one of doom metal’s triumphs of the year. The band extensively toured in North America and Europe, securing notable festival appearances (Roadburn, Basilica Soundscape, Sled Island, Psycho CA).

On the themes surrounding the concept and lyrics of “Mirror Reaper” the band state:

“The title ‘Mirror Reaper’ is indicative of the Hermetic axiom ‘As Above, So Below,’ written with two sides to form one whole. The song is both its own and its reflection, as an opposite is whole only with its contrary. Our focus as a band has always been the perception of ghosts and the implied archetype of the dichotomy of life/death therein. ‘Mirror Reaper’ is a continuation of that concept.

During the writing process we were devastated by the loss of our dear friend and former drummer, Adrian Guerra. In love and respect to his memory, we reserved an important yet brief section in the song for him that features unused vocal tracks from our last album. This specific movement serves as a conceptual turn in the piece, or point of reflection. We believe he would be proud of it as well.

‘Mirror Reaper’ was the first collaborative writing project with the new line up, and Adrian's death during it brought extra emotional weight. We sought to match the complexity and weight of these events within the composition of the piece.”

Additional vocals and lyrics performed and written by Erik Moggridge